On Safari in a Wheelchair: Inclusive Tourism in KwaZulu Natal 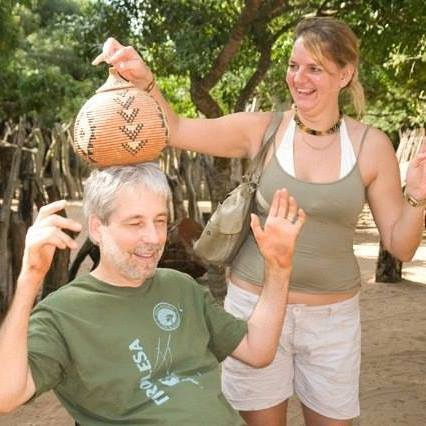 I travel a lot – more than most other quadriplegics that I know. Even so when I first look up at the sky on every trip to the southern hemisphere I am temporarily disoriented.

It’s not like I am a celestial navigator. I couldn’t find my way home from the corner pub by looking at the stars even if all I had to drink was Stones Ginger Beer. Set me sailing out on the ocean at night by the stars – well, I’ve never been sailing at night so I’m not certain – but I image you would never hear from me until I drifted up on a forsaken beach somewhere.

So I kept the shades closed on the 15 hour flight from the east coast of the US to Johannesburg and I didn’t see the night sky until I was safely tucked away in a wheelchair-accessible hut at Hilltop Camp inside Hluhluwe Game Reserve – but that’s jumping too far ahead in the story.

Jennae Bezuidenhout of Access 2 Africa Safaris is an enterprising woman. She is the reason I was able to make this trip.

She and her husband J. J. live in the area of Kwazulu Natal Province South Africa known as the Elephant Coast. Surrounded by about 400 game reserves, animal rehabilitation centers, sporting, leisure, and vacation destinations she lives and breathes travel industry in a corner of the country north of Durban. Since her husband’s paralysis she has taken what she has learned from her personal and business environments and woven them into something unique. She has become a provider of and an evangelist for safaris that include travelers with mobility impairments and other disabilities.

Jennae invited me to sample one of her safaris as a Visiting Journalist through the sponsorship of Tourism Kwazulu Natal. I later learned that I was the first journalist with a disability that they had agreed to sponsor.

Arriving on a connecting flight of one more hour in the air I met my smiling tall blonde South African hostess and the other specialist in Inclusive Tourism who would be part of this 11 day tour. Monica Guy is a sparklingly intelligent young British travel writer. She came with a pedigree including having written the first campus accessibility guide for Cambridge University, a prolific collection of online and print tour guide writing, and experience as part of the team that travels with Dr. Stephen Hawking. Introduced to our driver Aubrey who would accompany us throughout the tour we used the tailgate lift to enter the van provided by Budget rentals and began the journey.

Jennae’s wisdom was apparent from the start. Rather than rushing off to ‘relax’ in the bush we spent some time settling into a City Lodge in Durban. We ambled through the adjacent Gateway Mall purchasing the odds and ends that inevitably get forgotten when packing for a month-long trip.

Well-provisioned – and impressed by the indoor climbing rock and standing wave surf facility in the mall – we took a day trip to North Beach and uShaka Marine World. Ushaka is the largest marine theme park in Africa and includes the fifth largest aquarium in the world.

The park’s Zulu themes are immediately apparent. So is the good integration of accessible paths of travel. Unifying design themes were noticeable while passing through shops lining the first several blocks beyond the entrance. I was captivated by my first exposure to what I later came to know as “wiremen.” These are sculptures made of wire (sometimes beaded) and then illuminated.

The snorkeling pond was closed and the surf a little too vigorous so we watched the water world rather than entered it. The park’s aquarium is housed in what looks like a beached shipwreck. Charming – and easily wheelchair accessible via the same series of long ramps used by all visitors.

From Durban our trip took us to nearby Kloos and a stay at the remarkable Makaranga Lodge and Spa built on the 30 acre grounds of a botanical garden. The owners have augmented the beauty with a collection of Shona stone sculptures. From regal to playful these works of art set throughout the grounds are only part of the personal touch. Each room has original artwork collected by the owners. One half of the rooms are wheelchair friendly. Even the pool can be rolled into in a wheelchair. Makaranga is a rare find among high-end lodgings.

The overland portion of our adventure began with the journey the drive to Hlulue Game Reserve. The van ride, uncomfortable ride while sitting in the wheelchair, improved somewhat after I transferred to one of the narrow jump seats and gained a view out the side window. The hut at Hlulue was spacious and convenient. Situated at a distance from the restaurant and its imposing view the hut was a quiet retreat in an already relaxing environment.

A side trip to Ilala Weaver’s Co-op store was a feast for someone with a strong desire to support local craftspeople and indigenous arts. The business model is Fair Trade with works purchased from local artisans who are in turn compensated fairly. In turn they have the guaranteed income that allows them to mature in their art form. The results were obvious on every shelf. If there are any regrets about my trip it is that I did not have a few hundred more dollars on hand to purchase the beadwork, wood carvings, and Zulu baskets that so captivated me.

But the heart of the trip were the game drives!

Later our nights in the accessible hut at Bonamanzi Game Reserve were very enjoyable. We had more food than we could eat and a permanent show of Inyala and Wart Hogs grazing on the lawn. A whole new set of skills and senses are awakened in the bush. The ranger amazed us by spotting a chameleon no larger than my index finger clinging to a bush during a night drive – pitch black with only a lamp to see by.

Before returning to Durban and another delightful stay at Makaranga Lodge we had two other adventures.

We got a warm welcome at Dumazulu Cultural Village. We watched the athletic Zulu dancers. Then I sang a capella with them (in Zulu!) wearing an animal skin hat with a tail flopping in back. It reminded me of the raccoon-skin caps we used to call “Daniel Boone hats.”

We also headed to St. Lucia and its World Heritage estuary network. Literally risking life and limb to get from the inaccessible dock to an Advantage Tours cruise I was immediately rewarded when we came up on a Fish Eagle, a colony of brilliant yellow Weaver birds, and a family of Hippos. I was later impressed to see Advantage Tours’ new wheelchair-friendly boat waiting on land for permission to launch.

South Africa’s Elephant Coast is an underexplored tourist gem. With the slower pace, professionals like Jennae and her Access 2 Africa Safaris can offer close personalized service. The area’s “hidden secret” identity is about to change however. The new Durban airport with direct inbound international flights will go online in time for the 2010 World Cup. You can be sure that people will go home talking about this itinerary. Don’t wait until it is mainstream. Go now.

There is a story that circulates around the Rains’ family. It surfaced as we did some digging into our genealogy recently.

It generally starts with the lines, “The Rains came over the mountain (the Cumberland Gap during the westward expansion in the US) with Daniel Boone.”

Maybe it’s just a rationalization for my wanderlust. Still, I sense a kinship of spirit with Daniel Boone who is reported to have said, in answer to the question, “Have you ever been lost?” – “No, but I was once a might confused for a few days.”

I recommend taking a chance on a few confused nights under South African skies. Get lost if you are so inclined.

If you run into one of those cool Zulu “Daniel Boone hats” send me one, ok?