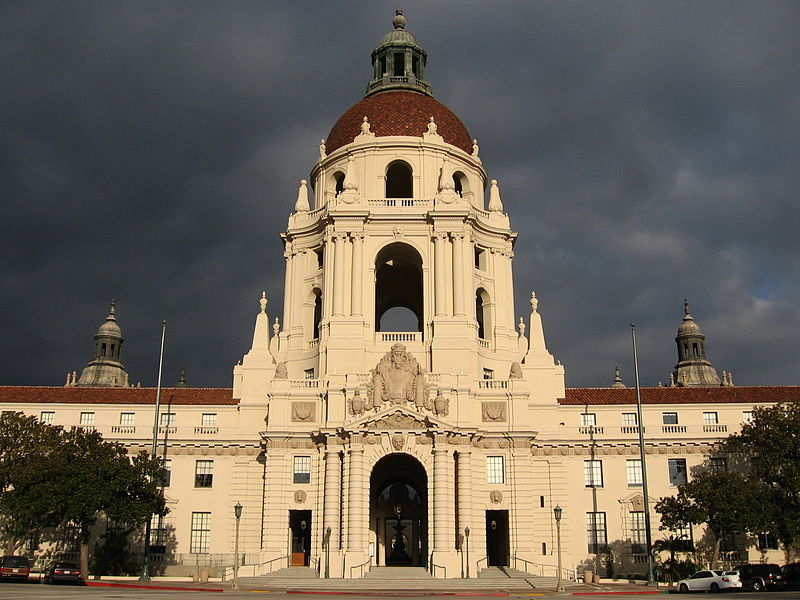 Each New Year’s Day, you either want to be here or stay the hell away.  We’re talking about Colorado Boulevard, the main drag going down through Pasadena, California and the Tournament of Roses Parade that takes place the first day of each year…unless it’s a Sunday…and serves as the pre-game festival for the Rose Bowl.

Sitting just a 20 minute trolley ride northeast of downtown Los Angeles, Pasadena resides in L.A.’s orbit but is definitely its own city.  If you’re in L.A., it’s very easy to get here on the Gold Line train that runs from Union Station to 7 stations across Pasadena.  Once there, the ARTS or Foothill Transit line 187 buses can get you around the city easily…both are wheelchair accessible as is the Gold Line.

Where L.A. is car culture, Pasadena is actively trying to discourage its use.  L.A. is not known for being pedestrian friendly…it’s even hostile to the walker at times.  Pasadena is made for strolling.  Los Angeles is gritty, hard, unwilling to let its guard down.  Pasadena is genteel, reserved, pretty, and upscale. L.A. is Two and Half Men…Pasadena is The Big Bang Theory.

This city of just under 150,000 was founded in 1886 and is the second oldest incorporated city in Los Angeles County, younger only than Los Angeles itself.  It has presented the parade each year, except in war time, since 1890.  The Rose Bowl dates back to 1902.

Now, it’s a city of distinct neighborhoods stretching six exits along Interstate 210 between Glendale and Arcadia pushing up against the San Gabriel Mountains.

The Rose Bowl sits on the west side of town in Brookside Park.  Along with its famous New Year’s Day game, it is home to the Bruins football team from UCLA.  A huge flea market is also held here on the second Sunday of each month.  If you’re here on a non-event day, you can take a peek through the south entrance.

The area around the bowl is also popular with joggers and bikers.  Golfers can head out on the adjacent Brookside Golf Course.

Just south of here is Suicide Bridge…or as it’s officially known the Colorado Street Bridge.  This beautiful arched span crosses the Arroyo Seco right next to the 134 freeway and, as its nickname suggests, has seen a few jumpers in its time.

Move east along Colorado Boulevard and you enter into Old Pasadena, the heart of the city.  Here at the intersection of Colorado and Orange Grove is where the parade starts each year.  This is also where all the TV cameras set up and is what you see when you watch.

The Norton Simon Museum is on the north side of the street, an excellent art museum set up by the billionaire before he died.

This area is a hive of activity with dozens of restaurants, night clubs, bars, and shops.  The original Lucky Baldwins is on Raymond, just a couple of doors south of Colorado.  If you’re a fan of The Big Bang Theory, this is the neighborhood that TV show is set in.  The Cheesecake Factory that Penny is supposed to work in is on the corner of Colorado and Fair Oaks.

Go a couple of blocks south of Colorado on Raymond Avenue and you’ll see the massive Green Street Apartments.  This was originally the Castle Green Hotel, Pasadena’s main hotel way back when.  It is now apartments but just about the only original old hotel building left in the city.

Moving east, you’ll get to the Playhouse District centered around the Pasadena Playhouse.  This historic theater is the official state theater of California and produces some great plays.  Across Colorado is Vromans, a very good and large bookstore.  If you’re hungry, stop into little Yahaira’s across from Vromans for some very good, artisanal Mexican food.  If you’d like something more traditional, El Portal…run by the parents of the man who owns Yahaira’s…is just behind it.

Going south on Los Robles, behind the big Paseo Colorado Mall, you’ll find the Pasadena Civic Auditorium.  Behind that, you’ll find an actual ice skating rink where you can take a few spins around the ice.

Just east of the Playhouse District is Lake Avenue, one of the city’s main North-South thoroughfares.  South of Colorado is a nice, trendy shopping area with a few good restaurants.  Diner fans will want to take a meal at Pie ‘n Burger, on California just east of Lake.  Skip Burger Continental, a locally legendary restaurant that has definitely seen better days.

Head south on Allen and you’ll end up in the parking lot of the Huntington Library and Gardens.  The former estate of Henry Huntington (of the Pacific Electric red car trolley system) is gorgeous.  Acres and acres of masterfully landscaped gardens along with a world class art museum makes this a wonderful place to spend an entire afternoon.

North of the freeway, Lake gets more ethnic and you’ll find many taquerias mixed in with some soul food and barbecue.

At the top of Lake Avenue are several trails leading up into the mountains.  There are the remains of a large estate here and you can walk over to the ruins of the Mt. Lowe Railroad that used to take tourists up to a grand resort on the mountain.  If you have the time and inclination, you can follow the roads and trails all the way up to the top of Mt. Wilson.

As we move ever east, the area around Pasadena City College (PCC) has many inexpensive eateries catering to students on a budget.  Zankou Chicken, just west of Hill Street, has some of the best rotisserie chicken you’ll find accompanied by their addictive, creamy garlic sauce.  North on Hill is the Dog Haus, which makes a variety of hot dogs and sausages.  The regular (snappy) and jumbo dogs are served on King’s Hawaiian rolls, which have a bit of sweetness to them.  The jumbos definitely go better with the sweet rolls.

We’re getting close to the edge of Pasadena when we move east to Rosemead Boulevard.  You won’t find too much here except for a few shopping centers and restaurants.  Nothing in this area really stands out but you can make your way over to Sierra Madre Villa and Foothill Boulevard and take the Gold Line light rail train back to the other end of Pasadena.

This is just a sample of what the city has in store.  There’s also the site of the original Busch Gardens, hiking in the Arroyo Seco, the Jet Propulsion Lab, and Cal Tech.  Tea at the Langham, drinks at the Raymond, and the world’s first Frisbee golf course.

Although there are plenty of low budget and low quality motels along Colorado Boulevard, here are four hotels I can definitely recommend…the Courtyard by Marriott on Fair Oaks; the Sheraton on Cordova; the Hilton on Los Robles; and the best of them all, the Westin on Los Robles.

In Pasadena, you’ll find the antidote for that other big city to the south.

The World on Wheels

An ongoing adventure of travel and living while using a wheelchair. Tim has been disabled from birth. Darryl is his father and caregiver who travels with him. Email us at dmusick61 at gmail-dot-com All content, images, and video copyright 2009 & 2010 – Darryl and Tim Musick

Thank you, Darryl and Tim Musick, for your permission to republish this article.