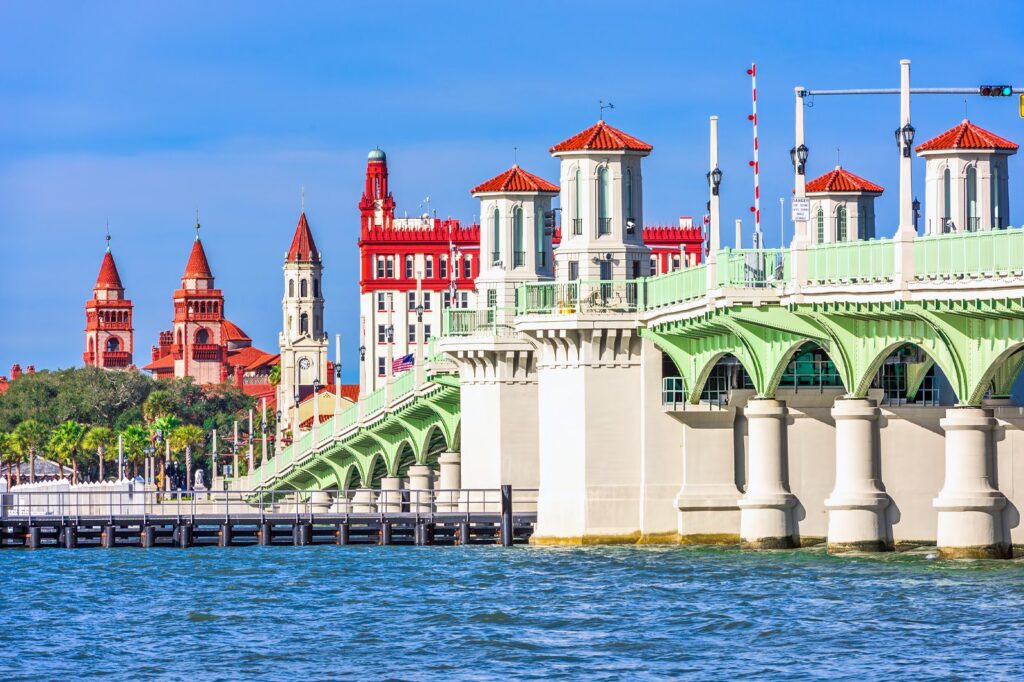 Quick…what’s the oldest permanent European settlement in the U.S.? If you said Saint Augustine, Florida you are correct!

First sighted by Ponce de Leon in 1513 (did he REALLY find the fabled Fountain of Youth?), Saint Augustine was founded by the Spanish in 1565, making it the oldest continuously occupied city in the continental United States.

We decided to vacation in Saint Augustine this summer, a change from our usual cruise vacations. I am happy to report that this is a wonderful place to spend several days exploring ancient history and the glamorous hotels of the late 1800’s.

Saint Augustine, despite its age, is quite accessible to visitors with disabilities.  We first visited the Castillo De San Marcos, one of the city’s main highlights. Construction began in 1672 and it remains the oldest and only existing masonry fort in North America. The fort is run by the National Park Service, and you can visit the website at http://www.nps.gov/casa/index.htm to plan your trip. Since the structure is so old, only the lower level is wheelchair accessible; there is a staircase to the upper gun deck where one can experience a re-enactment of cannons being fired. The restrooms are wheelchair accessible, and there is closed-captioning on the visitor orientation video.

The main street of the “Old City” is St. George Street, a pedestrian delight, with shops, museums, and restaurants galore. We spent time every day strolling up and down the street, enjoying ice cream, music and some quaint shopping.

The “golden era” of Saint Augustine arrived with Henry Flagler and his railroad in 1885. Flagler built the magnificent Ponce de Leon Hotel, considered his masterpiece, and the Alcazar just across the street. Today the Ponce de Leon is the home of Flagler College, and the Alcazar hosts the City Hall and Lightner Museum, which is wheelchair accessible. The Flagler Legacy tour is more difficult to navigate for wheelchair users as there is a short flight of stairs to ascend to the Dining Room. There is a stair lift that wasn’t working when we visited this summer, but should be when classes resume. The hotel is now used as dorm space and dining facility for the students.

Since Saint Augustine is so compact and a great walking town, we purchased tickets for the Old Town Trolley Tours, which are good for three days, a great way to see the sights. The trolleys run on a fixed route, covering 22 stops in 70 minutes. One can get on and get off at any stop and re-board later. There are 2 wheelchair accessible trolleys that can be boarded at the main depot. It’s suggested to call in advance to see what time those trolleys depart. One night we went on the “Ghosts and Gravestones” tour, where we dared to “board the trolley of the doomed!” Visiting the Spanish Military Hospital, the Old Drug Store and the Old Jail, one encounters many spirits along the way. The tour will try to accommodate guests with disabilities, but there is a lot of walking and some stair climbing, so please contact Old Town Trolley Tours in advance.

We stayed at a lovely B&B, the Old City House Inn & Restaurant, right in the middle of all the action. There is one partially accessible room on the first floor, and the yummy restaurant is wheelchair accessible. There are many accessible properties throughout the old town and the adjacent areas.

Crossing the famed Bridge of Lions (which is currently being rebuilt so the lions are in storage) from the Old City to Anastasia Island where the beaches are, we headed to the Saint Augustine Alligator Farm and the Saint Augustine Lighthouse. The Alligator Farm, founded in 1893 is one of Florida’s oldest attractions and is fully wheelchair accessible. The glass partitions to the exhibits are low enough for children and those using wheelchairs.

At the Lighthouse, while one might be able to climb the 219 steps to the top, the museum’s ground floor is wheelchair accessible via ramp, and there is a large print self-guided walking tour. There is a Braille lesson plan for those wanting to explore shipwreck artifacts, and many exhibitions have audio components.

All in all, Saint Augustine is a wonderful place to spend several days exploring and having fun, and has many accessible features for travelers with disabilities.