The San Gennaro Catacombs in Rome 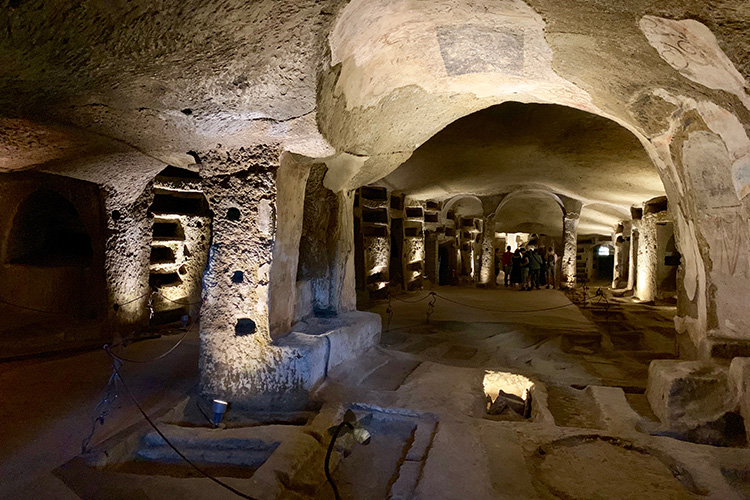 In Rome, early Christians escaped persecution and buried their dead in catacombs.  From the 18th century until the mid-twentieth century, tourists doing the “Grand Tour” of Europe escaped the heat of Roman summers in them.

If you’re squeamish about visiting tombs or you have claustrophobia, you must put the San Gennaro Catacombs on your sightseeing list.  Comparing the catacombs of San Gennaro in Naples to the catacombs in Rome is like comparing a pre-war (WWII) Manhattan apartment to one built in the 1960s.   The first thing you notice about the San Gennaro Catacombs is the height of the ceiling.  The spaces look more like the naves of cathedrals than the crawlspaces of Roman catacombs.   There is a dignified grandeur to these catacombs that all the Roman catacombs lack.   These are catacombs even a claustrophobe can love.

These catacombs are the pride of Naples, which (to stick with religious lingo) have been resurrected since the last time I was in that city more than 25 years ago.  Volunteer archaeologists keep on digging deeper — finding more levels (they’ve just unearthed a third level) — just as architects and lighting technicians find new ways to dramatically display the interior.  Archaeologists now believe that the these catacombs date earlier than previously thought — from the second century AD through the tenth-century  — the years of active burial.  (An oxymoron, since if you’re still “active” you don’t want to be buried.)  The total effect is — what it should be for a religious structure — ethereal.

Even the stone is a different color than the Roman catacombs — a yellow tufa.  This yellow-orange-brown effect, with deep carving, makes me feel as if I’m in an “interior Petra”!

There are many differences with the Roman catacombs.  In addition to high ceilings — and some barrel vaulting — and an overall feeling of spaciousness — here the actual burial slots are usually placed in arched niches.  Some of the 5th-century decoration of these arched-tomb vaults have painted decoration that reminds me of the mosaic patterns in the tomb of Galla Placidia, also 5th century, in Ravenna.

And how to get to Naples?   The easiest way is nonstop from the USA on Meridiana Airlines.